Posted on October 19, 2013 by Alexandra Lippman

I was recently invited to curate and perform the Sound Ethnography Project at Concord, an artist-run gallery and trans-disciplinary collective in Los Angeles, for the opening of their PS 1010: Road Felt exhibition. I selected and mixed fieldrecordings produced by colleagues and myself  for the Project. I appropriated a DJ-style setup to perform and mix the recordings. The sounds of a technologically-assisted ghost hunt seeped into the static-saturated radio of a bus in Beirut. A televised South Korean computer gaming championship faded into bird calls in the Brazilian Amazon. I also projected associated images and film to accompany–but not overwhelm–the sounds. I experimented with an ethnographic surrealism to try to highlight the importance of sound in our research, environments, and day-to-day lives. 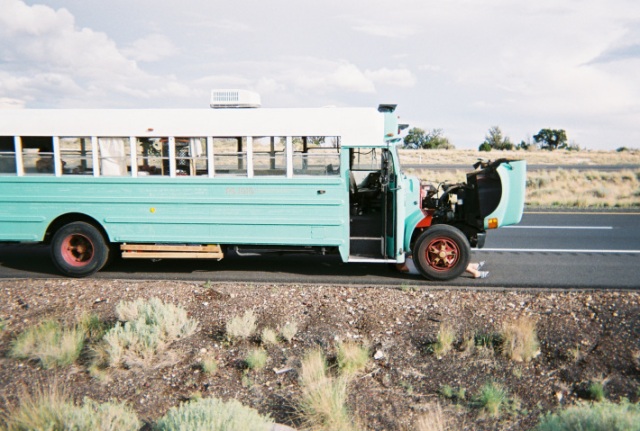 Concord’s Road Felt an exhibition based on their recent “research adventure” in a teal school bus traveling between LA, New Orleans, Memphis, and Oakland. They “returned with a mess of memories and documents (photos, notes, soil samples, rips in our clothes). Somewhere in between memory and this documentation is our archive.” They then organized their by feeling:

Feeling is a peculiar mode of organization. It can’t be disagreed with, like place or date. But unlike intuition or chance, it can be explained, explored, and justified. Feeling is neither subjective nor objective—a contradiction the difference between emotion and affect is supposed to clarify. Rather, feeling mediates the divide—a feature that capital enjoys poaching as a technology and a commodity.

The exhibition really impressed me with how they embraced the excess and the messiness of the archive, seeming to question its boundaries. Photographs, sound recordings–pick up those unmarked headphones on the wall–pages from books, video, various documents were displayed to dizzying effect.

I also was lucky to share the evening with  Bitter Party an LA-based band which “celebrates the melancholy of life” experimenting with “ghost pop” from Asia. They “thrive on musical adventures across media. Parsing and mixing content from dusty tapes, vinyls, songbooks, and YouTube channels, they enliven song memories across the Pacific to haunt their post-cosmopolitan, post-digital living.”

This entry was posted in Los Angeles, Uncategorized. Bookmark the permalink.