Made in L.A. Soundmap

Imagine if as you traveled through the city, you could hear some of its stories? Imagine if this were in L.A., a supposed non-city, where most people who can afford it travel the freeways until spit out at their destination. Airless, scentless, cocooned with their own personal car soundtrack from Spotify, stacks of (unlabelled) CDs, or the radio. Alternatively, one could bike to the sounds of car engines–even while blasting an iPhone or MP3 player.  In conjunction with the first biennial of Made in L.A., multi-museum and gallery exhibition of upcoming and emerging local artists, the Hammer Museum produced a (free) app for that.

One’s location will trigger site-specific stories and snippets of interviews of participating artists and curators in the biennial. In between the various points, local music selected by LA DJ collective and online “future. roots. radio” Dublab streams. 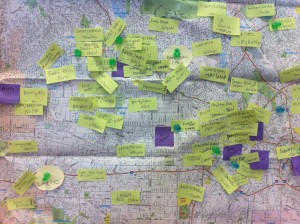 “The analog version of Soundmap. Each of the yellow post-its represent an audio segment”

From Made in L.A.’s fascinating behind the scenes description of the making of the app:

“Made in L.A. Soundmap is a site-specific mobile audio experience designed for use while traveling to, from, and in between the three biennial venues in Culver City, Los Feliz, and Westwood, providing visitors with insights into art making in Los Angeles today. Made in L.A. Soundmap explores Los Angeles as the context for the exhibition through interviews with Made in L.A. artists and curators. In a first-of-its kind usage of geolocative technologies, audio segments from these interviews are placed throughout a city map, with each location relating specifically to the segment content. Audio segments play automatically as an app user moves through the city, responding to the users’ specific location. In between segments, music curated by the local collective DUBLAB creates a soundtrack for one’s journey through the city.”

I really love this idea. And look forward to listening to the city in a new way.